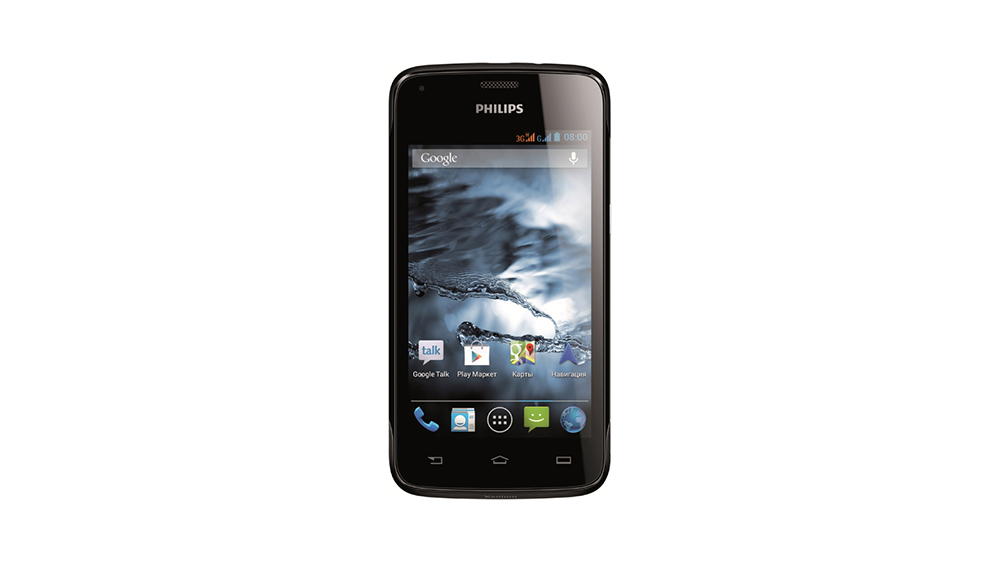 Philips Xenium devices have long been associated with a good battery and, consequently, with a long battery life. Recently, the company introduced the budget novelty Philips Xenium W3568 and in this review we will see how this device appeared. The smartphone can work with two SIM cards and has a powerful dual-core processor. The Philips Xenium W3568 has a discreet appearance, like most budget models. In terms of size, the device is slightly larger than its competitors, due to a more efficient battery. The top and bottom ends of the phone use a matte plastic with a cover, reminiscent of soft-touch cover sensations.

At the top of the front panel there is a video call camera, as well as proximity sensors, lighting and a speaker, protected by a miniature net.

Below the screen are touch control buttons and a microphone hole. On the right edge there is a power on / off button on the device. On the left is the volume control. The buttons are quite convenient, have a large and distinct movement.

The phone is assembled quite qualitatively, the details perfectly match each other and do not create.

In the Philips Xenium W3568 smartphone installed the well-known dual-core MediaTek MT6572 chip, the bus frequency of each core is 1.2 GHz. The RAM of the phone is 512 MB and 4 GB internal. The device is equipped with a Mali-400MP video module.

The smartphone runs Android 4.2.2 Jelly Bean operating system. Programs initially installed on the phone include a convenient TouchPal keyboard and an Xenium Club app store. There are also Google services on the phone. For the price category, the device works pretty fast. There are enough performance to work with various applications, but high-demand games may not start on this model.The phone transmits the speech perfectly, the speaker hears loud and clear. You can install two SIM cards in your smartphone, because there is only one radio module, when you use only one SIM card, the second one will be locked. The smartphone has a high quality Wi-Fi module that holds the signal well. But GPS, works with small problems, satellite search takes a long time, and sometimes the signal is lost.

Philips Xenium W3568 has a 4-inch TFT screen with 800×480 pixel resolution. The details of the displayed image are good, but in terms of brightness and viewing angles, this is honestly a weakness of the model. The image is hard to see in the sun.

The smartphone has two rooms: front and main. The resolution of the matrix of the main chamber is 3 MP and the frontal one is 0.3 MP. The main camera can record HD video, this is an unambiguous plus of the Philips Xenium W3568, but in terms of images, although not different in special quality, they are quite acceptable, considering the cheap price of the device.

The battery capacity installed in the model is 2000 mAh. The phone complement is designed to reduce power consumption. This is sufficient, so that, with an average usage activity, the device has been operating for about two days. When you watch a video, it will take about 5 hours without recharging the phone. According to the manufacturer, the phone operates for thirteen hours in talk mode and approximately 500 hours in standby mode.

If we consider models with a price range of about five thousand rubles, then most of them are Philips Xenium W3568 inferior. By purchasing this budget model, the buyer receives a phone that has a good battery charge and has excellent performance and functionality. From the weaknesses of the phone, one can distinguish a poor brightness of the screen, whose image is poorly visible in bright sunlight.

The average price of a device in Russia is about 4,500 rubles.